Please note that this project is now closed. For up to date information about southern eclipsing binaries, refer to www.eclipsingbinaries.prettyhill.org.

These are eclipsing systems having ellipsoidal components and light curves for which it is impossible to specify the exact times of onset and end of eclipses because of a continuous change of a system’s apparent combined brightness between eclipses; secondary minimum is observed in all cases, its depth usually being considerably smaller than that of the primary minimum; periods are mainly longer than 1 day. The components generally belong to early spectral types (B-A). Light amplitudes are usually <2 magnitudes in V. An example EW binary light curve is shown in Figure 1.

These are eclipsers with periods shorter than 1 day, consisting of ellipsoidal components almost in contact and having light curves for which it is impossible to specify the exact times of onset and end of eclipses. The depths of the primary and secondary minima are almost equal or differ insignificantly. Light amplitudes are usually <0.8 mag in V. The components generally belong to spectral types F-G and later. See Fig. 2 for an example of an EW light curve. 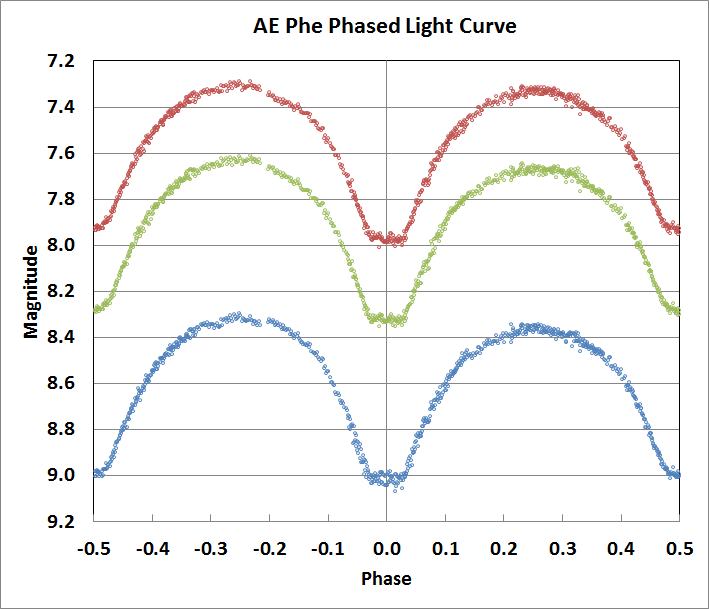 Their short periods make them excellent targets for CCD and DSLR observation by doing all-night imaging runs. In the southern hemisphere they have been very poorly observed and we just don’t know enough about them.

Binary star systems are as common as single-star systems like the Sun, and the stars in them can act very differently from isolated stars, testing and constraining our theories of stellar origin and evolution. Yet they are not nearly as well understood. In particular, theories of the origin of binary stars have difficulty in accounting for very close binaries such as the EBs and EWs. Maybe they spiralled in towards each other when both were in a primordial dust disc; maybe one reached red-giant phase when they were far apart and enveloped the other causing inward spiralling and other changes.

Moreover, our understanding of what happens to the stars when they are this close is not settled. For example, the EWs often have a common gaseous envelope whose photosphere we see. It is thought this common atmosphere may cause them to spiral together and coalesce, but we’re not sure what results. See Figure 3.

Figure 3 A model of an EW binary constructed from light curve data such as in Figure 2, using BinaryMaker 3.

To shed more light on these problems, more observations are needed, which can be very well done at the amateur level. Indeed, there are few professionals with the telescope time, and grants, to do the rather time-intensive observational work needed.

What are the aims of the project?

The overall aim is to observe and analyse our selected EB and EW targets, leading to publication. Many of the chosen DSLR targets are of particular interest to Ed Budding’s group, who will do extended analyses as well as carrying out spectroscopic work.

More specifically the aims are:

Successful results will be published on the VSS website, and in refereed journals carrying as authors everyone who contributed significantly to the published research.

What equipment do I need?

SLR cameras will be used on targets brighter than mag 10.0 V, and CCD cameras for fainter objects. Since you will be tracking a target for many hours, you will need a reliable mount and drive. CCD cameras require a telescope of course, but for DSLR work a telephoto lens will usually do. For more on using DSLRs for photometry see Photometry Guides.

You will need to carry out photometry on the images you acquire. Most imaging software contain a photometry package.

How does the project operate?

The project operates entirely online. Aside from the material on the VSS website under Projects > EB and EW Binaries Project, project members have access to two other resources:

The first stage of work is for an observer to acquire a long run of images on their selected target, and then carry out photometry on them. When enough photometric data are acquired on a target, you can start the analysis of your photometry, aiming at the goals listed earlier. If you’re new to this work, Mark or Tom will assist you.

Results and analyses are all kept online, and you are encouraged to collaborate with other project members, especially for the more advanced analysis stages. Mark or Tom will provide advice along the way.

How do I do the observing and analysis?

This differs somewhat between DSLR and CCD work. But whichever instrument you use, you will be given a target system to observe and you should carry out long imaging runs, preferably all night, until you have covered all phases of its orbit. It is best if only one observer works on each target, to ensure the data all come from one instrument system. This greatly improves the reliability of the data and simplifies a lot of analysis. Use Tom’s spreadsheet Orbital Phase Calculator, on the website under Resources > Software and Calculators, to help you get full phase coverage over several nights.

Your best source of information on your target is the AAVSO VSX portal (www.aavso.org/vsx), and make use of the External References therein.

When you’ve done the photometry on your night’s work on the target, you’ll upload it to the project’s Dropbox folder. We’ll provide you details on how to do this (it’s all in the Project Specs document in the Dropbox). However when you start out in the project, you’ll send your data to Mark or Tom as appropriate for comment and advice, after which you’ll get access to the Dropbox and egroup.

When you’ve got enough such observation sets to cover all orbital phases, or three primary minima, you can start analysis. Here’s some software we recommend:

PERANSO (www.peranso.com) is a widely used software product to find times of minimum and light elements, and to construct phased light curves out of your observation sets. O-C analysis can be done with a spreadsheet. There are two very good products for astrophysical modelling, BinaryMaker 3 (www.binarymaker.com) and PHOEBE (http://www.phoebe-project.org/).

The following is more specific advice for DSLR and CCD work.

Observers should concentrate on the primary DSLR targets as these are of particular interest to Ed Budding’s group. However, a list of secondary targets has been compiled from the AAVSO Variable Star Index (VSX) for those nights when no primary targets are suitably positioned.

These secondary targets are bright southern EB and EW eclipsing binaries with periods less than 1.5 days, maximum brightness of at least magnitude 10 in V and primary eclipse depths greater than 0.1 magnitude in V. Most have rarely been observed since discovery and have woefully out of date light elements.

Finder charts and recommended Comparison stars have not been provided. To measure Times of Minima untransformed instrumental magnitudes are fine. The observer is free to select Comparison stars suitable for the field of view of their imaging system. I am happy to help with this.

For light curve modelling, however, good Comparison star catalogue magnitudes are needed. See below for advice on finding suitable Comparison stars. Furthermore, instrumental magnitudes must be corrected for atmospheric extinction and transformed to the standard BVR system.

Traditional methods for accomplishing extinction correction and transformation are well covered in the literature and require calibration images of different fields to be acquired in addition to the Target star images. To avoid this added complication I’ve developed an Extinction Correction and Transformations for DSLRs Excel spreadsheet which performs extinction correction and transformation using only a time series of the Target field. It’s based on the Citizen Sky Intermediate Spreadsheet (CSIS) which processes a single observation at a time. My CSIS2 spreadsheet uses macros to process any number of observations. This spreadsheet and a Modified CSIS User Guide are on the website at Resources > Software and Calculators.

CSIS2 requires an ensemble of 6 Comparison stars which you need to identify within your DSLR field of view. These Comparison stars must be non-variable, well separated from nearby stars, have similar brightness to the Target and have well-known catalogue magnitudes. Planetarium software is invaluable for this selection process.

Since our targets are relatively bright the Tycho 2 photometric database is a suitable source of catalogue magnitudes for Comparison stars. The database contains standard B and V magnitudes derived from Tycho Bt and Vt magnitudes. The planetarium software Guide9 provides these values along with a wealth of information on the bright stars suitable for DSLR photometry. Other planetarium software may also be suitable. The AAVSO SeqPlot application (http://www.aavso.org/seqplot) is another excellent source of catalogue magnitudes.

Catalogue V-R colour is not included in the Tycho 2 database (or elsewhere generally) but can be estimated from the B-V colour index and luminosity class of the star using equations from Caldwell et al. 1993, SAAO Circulars, 15, 1-29 (see Figure 4). The CSIS2 spreadsheet includes a worksheet with this calculation. Spectral type and luminosity class can be found in Guide9 or the SIMBAD database.

Most of what Mark said above about DSLR work applies here too, but we don’t need to worry about extinction because of the small field size of a CCD camera, and provided you choose comparison stars of about the same colour index as the target.

In the interests of not scattering our efforts too widely, I have a short list of interesting southern EBs and EWs. Contact me and I’ll assign you one suitably positioned for the current time of year. This will be “your” star, you will collect all the observational data on it. When done with that one, contact me again for another.

Observations must be carried out using Johnson-Cousins filters, and you need to have the transformation coefficients for your filters. The only exception to this is if you’re simply aiming to capture minima times. But even then, it’s a pity not to be able to use that data for later analysis tasks, so use filters anyway and transform the data later if you haven’t yet acquired your transformation coefficients.

Ideally you will observe in B, V and Ic; if necessary, V and one of the other two. You might find, for example, that B integrations take too long for late-type targets, so use V and Ic; and just B and V for early-type targets. It’s best to obtain a dense V data set, with the other filter being used less often. For example, you might repeat VVVVB or VVVBVVVIc. Then use the V series to measure minima times.

Now all you have to do is contact Mark or Tom and you can start on the next clear night – and make a serious contribution to the astrophysics of close binary stars. Enjoy.