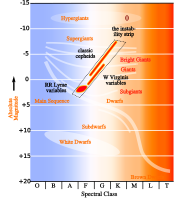 This project is the second stage of the Bright Cepheid project. It makes use of the advantages of standard DSLR cameras: wide fields and the ability to make measures in three colour bands simultaneously. It is limited by the camera’s sensitivity which appears to be about magnitude 8 with exposures of 20-30 seconds. But this still allows about 80 targets south of the equator. A list of all such objects can be found at Southern Cepheids to Magnitude 8. This is divided into several categories: low amplitude; long period (>10.0 days) which are mostly large amplitude objects with frequent period changes; and assorted Cepheids which are neither of these types. Previously many of these objects had been monitored by the ASAS project but this appears to have ceased around 2008 so that there is now no ongoing observational study of these stars. We plan to fill this need.

Purpose of the Measures

Cepheids are massive and luminous stars which are evolving quite quickly. This evolution sees changes in temperature and radius. At certain temperatures and envelope densities a mechanism within the star causes sustained oscillations which are seen as pulsations of the surface of the star causing brightness and colour changes. On the Hertzsprung-Russell Diagram this produces what is called an instability strip. 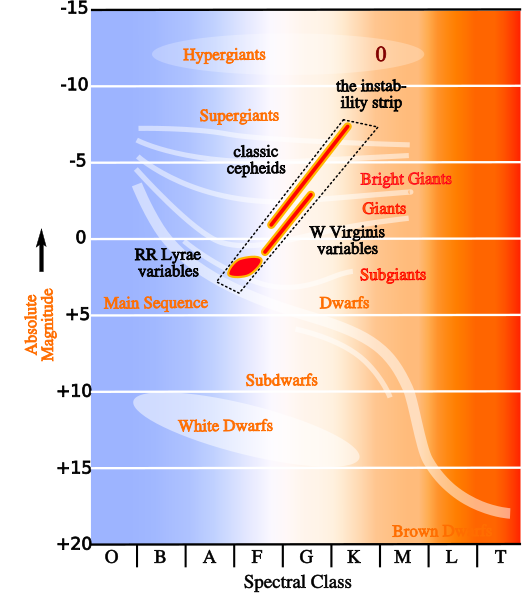 These massive stars cross this strip several times as they expand and contract on a long timescale (103– 105 years) due to the changes in internal nuclear processes. As they proceed across this region the periods change, sometimes smoothly but often abruptly. By using an O-C Diagram which plots the actual observed epochs of maximum against a calculated epoch and period these changes can be detected to a high degree of accuracy.

In the graph in Figure 2 we show epochs of maximum of the Cepheid S Crucis fitted to the GCVS epoch of JD 2434917 (23 June 1954) and a period of 4.689735 days (not the GCVS period, see Figures 3a,3b below). The vertical scale shows deviations in days, the horizontal scale cycles before and after that epoch. The earliest measures are visual, dating from 1891. There was a marked change in period in 1968 and there may be a smaller cyclic change. We await the 2011 epoch with interest!

First you will need to become familiar with DSLR photometry. You should read the informative series of articles by Mark Blackford and Glen Schrader in the Variable Stars South Newsletter from 2011 February onward then peruse the Tutorial on DSLR Photometry on this website. This method of photometry is relatively new, particularly as Variable Stars South is using multiple colours and full transformations to the standard colour system to achieve very accurate measures. This allows you to use all three filters in your camera to make measures thus adding to the accuracy of epoch determination.

To make the measures as accurate as possible we recommend that you use a method known as Ensemble Photometry which compares the target star to 6 other stars of known magnitude and colour which have been selected to bracket the Cepheid in colour. This keeps the transformation corrections low. The list of Bright Low-Amplitude Cepheids contains 22 targets the chart for each of which is accessed by clicking on the name. Not all charts are yet available but will be within a few months. The comparisons are lettered to avoid needless clutter on the charts and are displayed as a table on the actual chart. All charts are rectangular to conform to the shape of the camera image.

Measures should be made in clear sky and not within 30o of the Moon. They should also be made within 45o of the zenith. Best results are obtained with about ten consecutive images of each star. The reduction methods are explained in the DSLR Tutorial, and you should then use the Data Reduction Spreadsheet to derive the transformed measures. These can then be entered in each star’s spreadsheet available from Managing the Data.

Our goal is to determine annual epochs of maximum which requires about 20 to 40 measures each season. To avoid over observing of some stars refer to the website tables of measures which will be updated regularly.

These should be sent each month to the project coordinators. They should also be sent to the International Database maintained by the AAVSO. You should keep a careful eye upon the accuracy as shown in the spreadsheet.

Epochs are determined by fitting the individual measures to a mean light curve. These two graphs show the mean light curve and individual measures through the V filter. The U and B light curves made in Auckland are not shown. This project will be fitting BVR measures as U and I are not accessible to DSLR equipment. These stars show large colour changes associated with temperature so the most amplitude is in the B filter with least in R. We also have to allow for a slight colour/phase effect – maximum is reached in B before V and is even later in R. 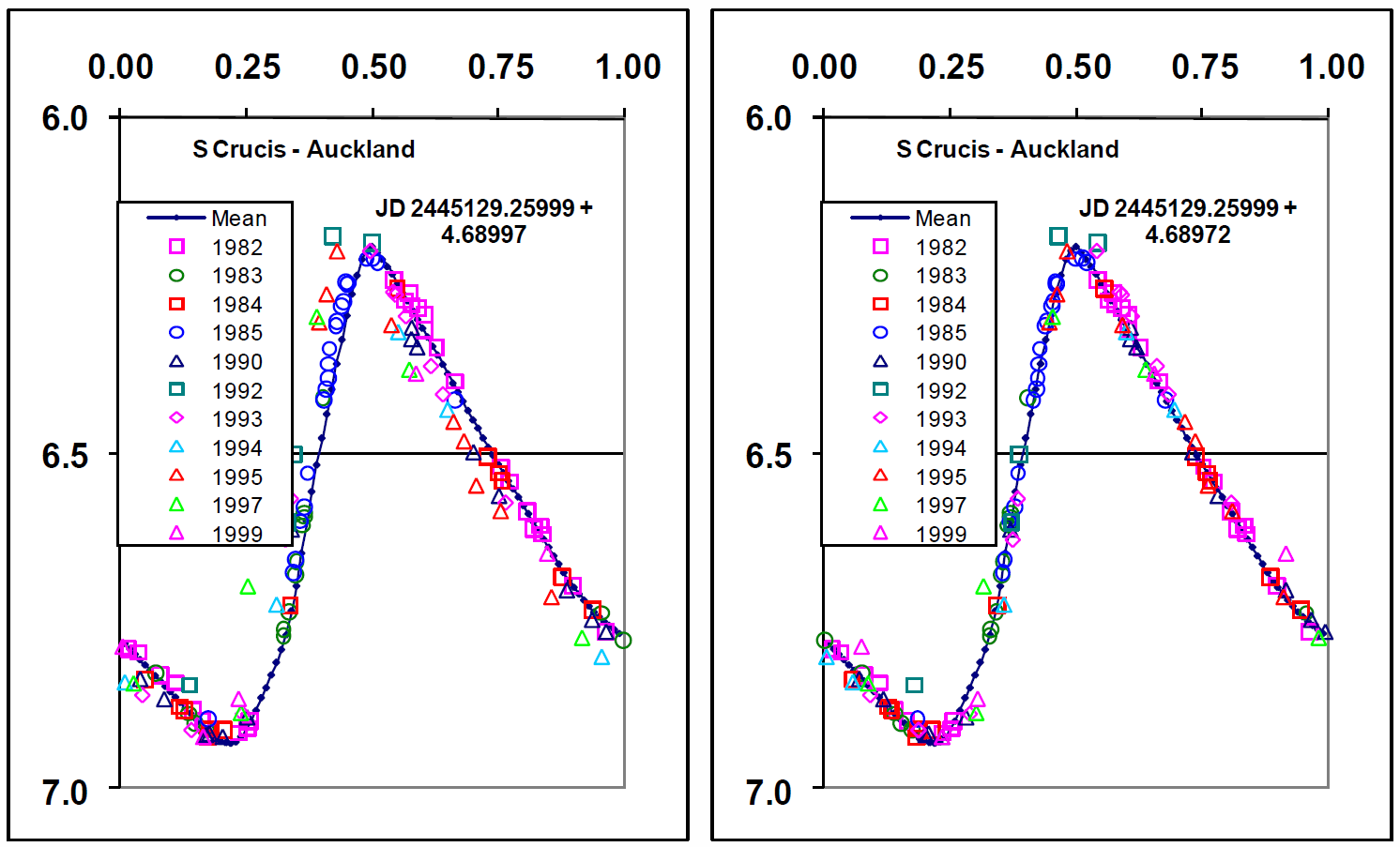 On the left this graph shows measures of S Crucis, a relatively bright Cepheid near kappa Crucis, over 18 years fitted to the GCVS period, and an epoch based on the first epoch determined at Auckland Observatory. There has obviously been a change in period, and this is shown by the better fit in the graph to the right where the same measures are fitted to the period of 4.68972 days. Prior to these measures it was believed that the period of this star was changing in a gradual manner but it’s now quite clear that there was an abrupt change in 1968.

Timing is important, especially in the shorter period stars. This will be based upon the mean of the image series start and finish times. A further correction will be applied – a heliocentric correction which translates all measures to the centre of the Sun. The Earth is at times closer to the variable star than at others. For a star on the ecliptic the variations can be as much as +/- 501 seconds although at the ecliptic poles they are zero.

Determined epochs will be published annually and if any star proves particularly interesting a special paper will be published. All contributors will be acknowledged with the more prolific observers included as co-authors in accordance with conventional practice.

There are two other lists – Cepheids with longer periods and those with periods below 10 days but with moderate to large amplitudes. Charts and comparison series for only a few of these exist at present. Some observers may wish to measure some of these stars, so the method of chart/comparison selection is mentioned below.

For charts we have used Project Pluto’s Guide 8 by Bill Gray. They are nominally 5 degrees on the shorter side so match the DSLR 4.8 x 7.0-degree field reasonably well. The star sizes have been modified by using the Star Display option, selecting an appropriate limiting magnitude and range. This provides a more recognisable chart than the AAVSO’s rather rigorous routines and removes most of the clutter. To avoid this clutter, the comparison stars are lettered and listed.

Comparisons are selected by looking up the colour details of possible stars. Since shorter period Cepheids are generally in the B-V colour range of 0.4 to 0.9 we select stars which lie within or bracket this range. It’s better to keep the range symmetric, thus reducing colour corrections to a minimum. (The longer period Cepheids are usually redder, and comparisons are more difficult which suggests that these may be better with shorter focus lenses or visual measures). The V magnitudes are transformed Tycho values, as are the B-V values for consistency (the non-satellite measures of B-V may be better than these but the difference is insignificant). V-R is calculated as 0.52 x B-V. This latter is not entirely satisfactory and will gradually be replaced by actual measures of fields in conjunction with E Regions. This procedure is explained in the 2010 November VSS Newsletter.

One other factor in selecting comparisons is to keep them symmetrically located around the target star. As explained in the section on ensemble photometry this reduces the effects of primary extinction at low altitudes. Since the Cepheids are seasonal this is not really a problem unless you target stars near the pole or the equator. But it’s a useful precaution and does reduce the effects of undetected cirrus or similar haze.

AAVSO’s SeqPlot has transformed V and B-V values for many of these fields from Tycho. Whilst these differ from some other values by a few millimags we have used these for consistency, and they can be used in fields for which charts have not been published by this project.

So, if you wish to work on some of these uncharted stars use this approach. You should avoid all NSV stars although many of those listed are the result of poorly transformed measures in the past. In most cases the Hipparcos errors over one or two hundred measures provide useful information about the stability of the star. Advise the coordinators of what you’re using so that this can be added to the website.